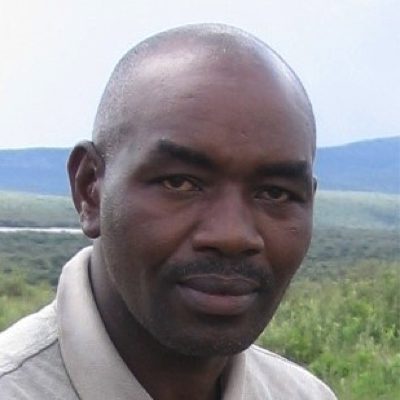 Humphrey Munene works for Mount Kenya Trust, a not-for-profit organization that is committed to help conservation efforts within and around the Mount Kenya ecosystem. He has seen the organization grow for the last 20years not only in terms of personnel but also in projects expansion and impact on people and forests and wildlife.

Humphrey’s holds a bachelors. degree in Wildlife management and a Post Graduate Diploma in Education  Humphrey actively took part in starting of core Mt. Kenya Trust programs that have become impactful projects. Over the period, successfully coordinated the implementation of electrified fence projects at various parts of the Mt. Kenya National Reserve to arrest escalating cases of Human-Wildlife conflict. In an effort to stop poaching incidents, he led several de-snaring operations in Mt. Kenya National Park & Reserve in which snares set up by poachers were removed and destroyed. Such operations have saved scores of wild animals from the hands of poachers.

Humphrey also coordinated a reforestation project in which over 1000ha degraded parts of Mount Kenya Forest are planted with indigenous tree seedlings. To address the missing link between people and environment, he leads a team that constantly conducts environmental education sessions in schools and to the public through film shows and conservation talks. Thousands of school children and public neighbouring Mt. Kenya national reserve have been sensitized on the need to protect and conserve the Mt. Kenya ecosystem.

Humphrey was brought up in a rural farming community where he developed passion for farming. While not working for Mt. Kenya Trust he has a small demo farm from which to educate neighboring farmers on modern farming technics, water harvesting and its sustainable use.