A substantial grant from the German Government through KfW has taken the Southern African Wildlife College (SAWC), one of Africa’s premier conservation skills and training facilities, to the next level.

“Conservation in southern Africa is facing enormous challenges. We are proud of the role the College is playing in developing the human and social capacity to tackle these challenges effectively, innovatively and with integrity. This generous grant from the German government has equipped us to better serve the region as a recognised SADC centre of specialisation in conservation education, training and skills development, to the benefit of people and wildlife,” said College CEO Theresa Sowry, at the inauguration of the new facilities on 6 September 2018. 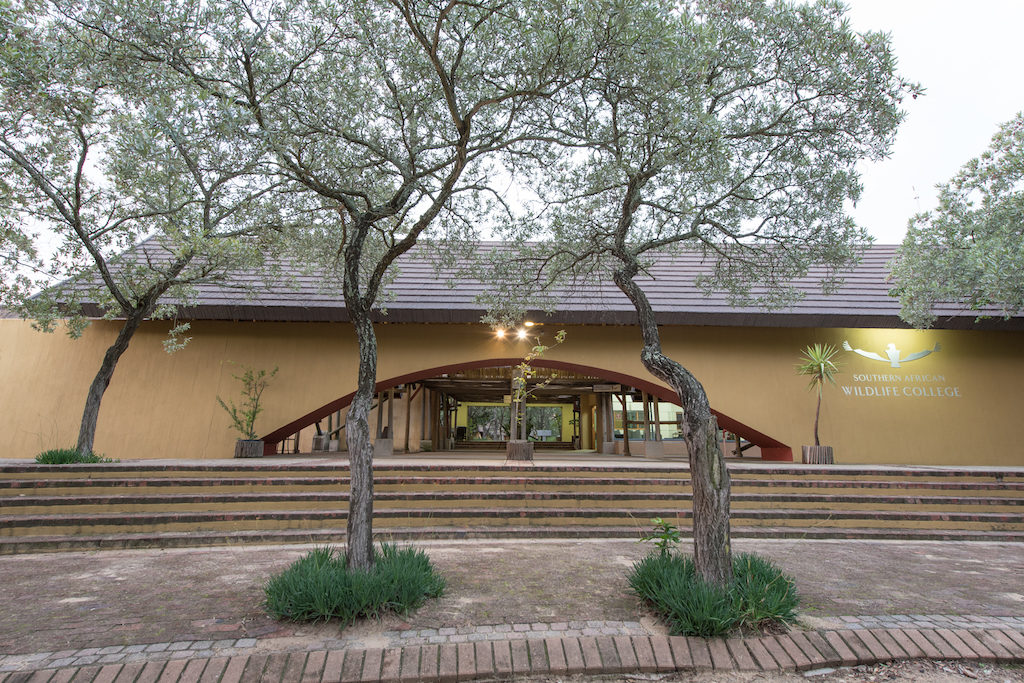 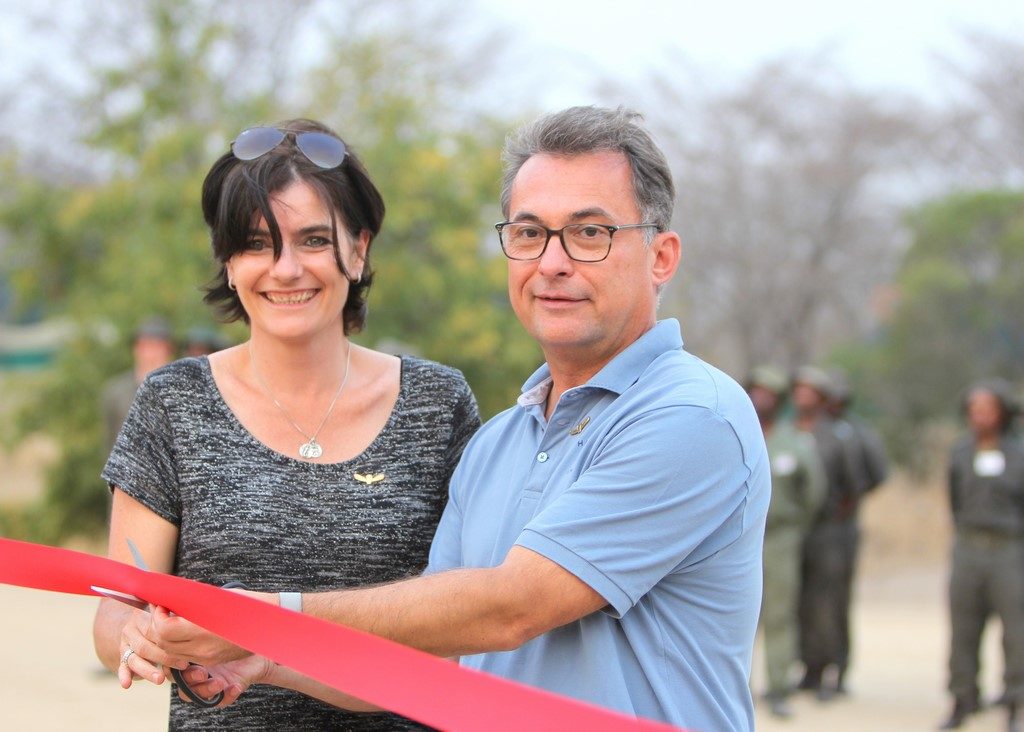 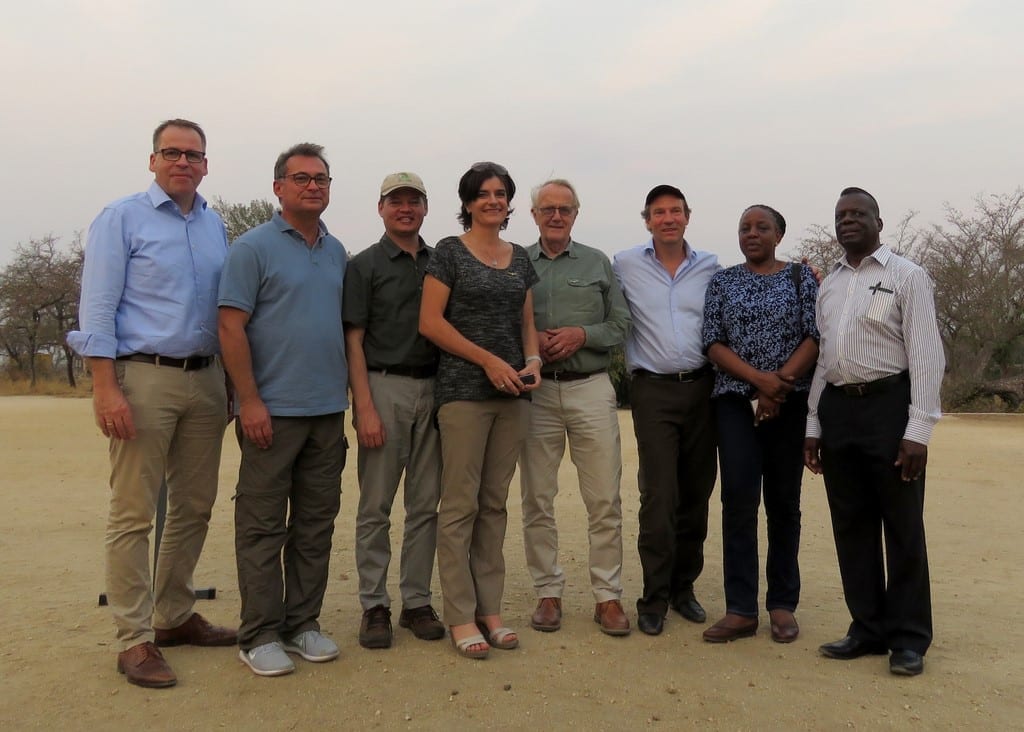 As part of the R61.4-million grant (equivalent to 4 million Euros), which follows an initial infrastructure development grant of R28 million in 1996 (equivalent to about 5 million Euros) when the College was first established, the Phase II funding through KfW has paid for additional staff houses, office space and lecture rooms to accommodate the increased staff complement and growing student body, as well as a fully equipped field ranger training base.  The College has also made significant steps towards greening its campus, with infrastructure service upgrades and the piloting of more environmentally and economically sustainable building techniques. 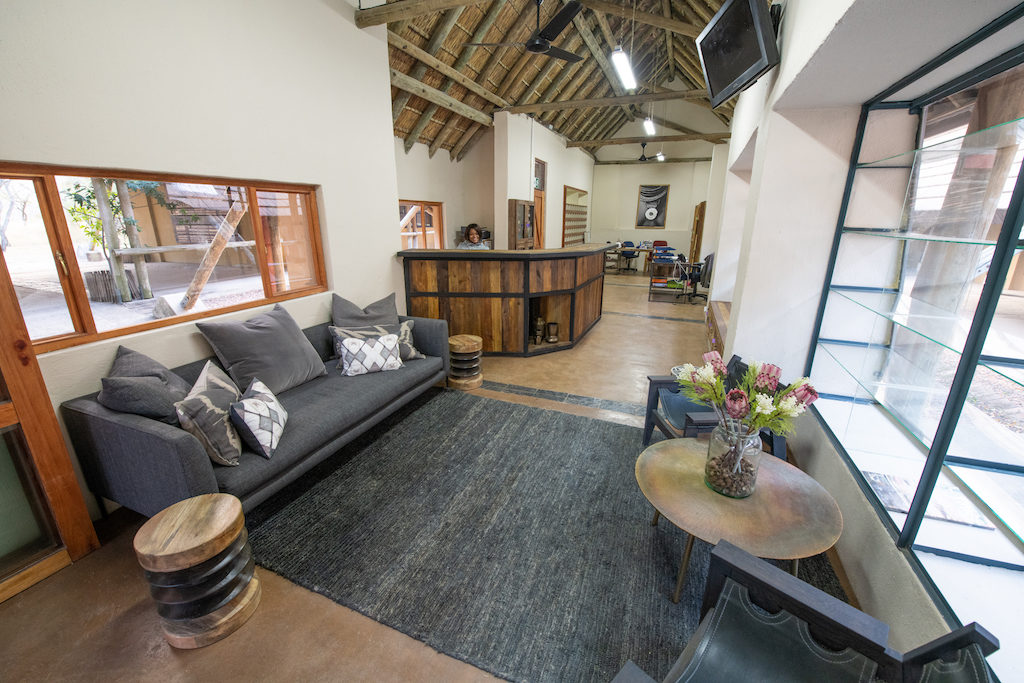 Reception at the SAWC’s main campus, built under the Phase II development project. 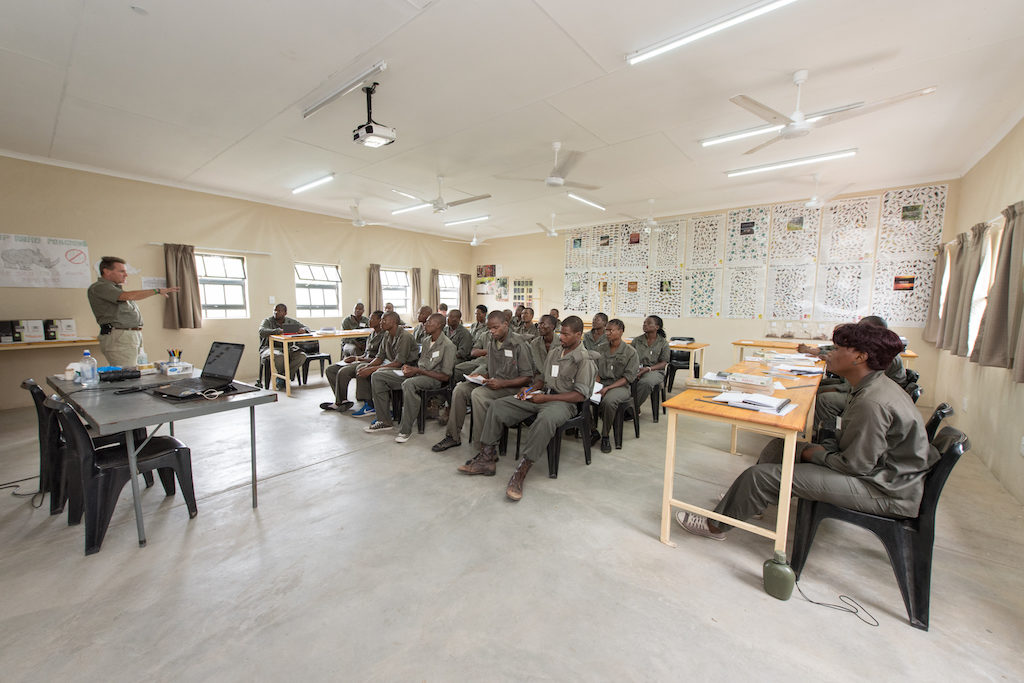 Field ranger students in one of the new Phase II classrooms built at the ranger base. 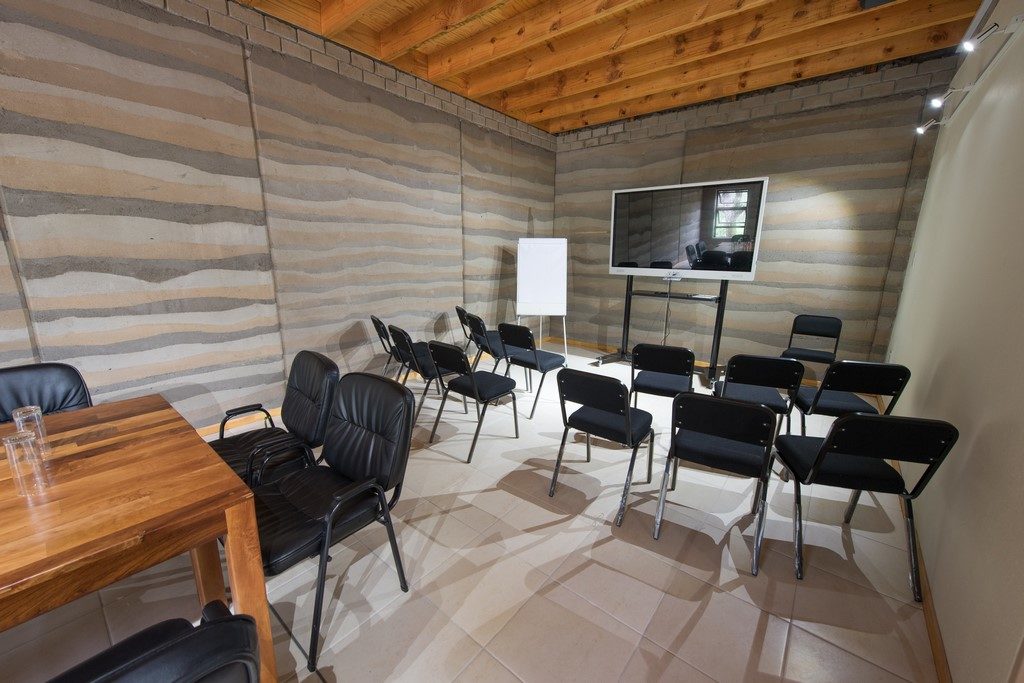 One of the classrooms in the Applied Learning Department building, which was built as part of the Phase II infrastructure development using the rammed earth building technique.

“As a promotional bank, KfW supports change and encourages progressive ideas on behalf of the German government. The College works with various conservation agencies and organisations across the region to give the custodians of protected areas the skills they need to succeed in often challenging circumstances. It also places a high priority on cooperation with local communities who play a vital role in the unified approach to the sustainable management of natural resources. We believe that KfW’s support for these infrastructure upgrades at the College will enhance its ability to deliver on its training mandate for the SADC region,” said KfW’s board member Joachim Nagel.

To date, the College has trained over 16 000 people across various accredited programmes, learnerships and short courses, from protected area managers, to field rangers. As most trainees and the conservation agencies that employ them lack the financial means to cover the costs of this training, the SAWC relies on the generosity of donors to fund this vital investment in their futures – and the futures of the areas they are entrusted to protect.  This has the potential to help transform the biodiversity economy of the region and open up southern Africa’s existing protected area network and broader transfrontier conservation areas.

“To have worked with KfW almost from the inception of the project to the point we’ve arrived at today, where the College has now reached the full capacity of the footprint allowed within the Greater Kruger National Park and is a recognised leader in its field, makes us extremely proud and grateful. Our sincere thanks to the German government as the funding provided also helped us to leverage support for extra strategic projects, such as our K9 Unit,” said Sowry.

In the unified approach to the sustainable management of natural resources, a high priority is placed on co-operation with local communities who play a vital role. As such, the Mnisi community was a major stakeholder of the project, given that the community lives alongside the College and conservation areas such as the Kruger National Park and Manyeleti Reserve.  To this end the College aimed to ensure that the community, as conservation partners, benefitted fully from the “Phase II” infrastructure development. 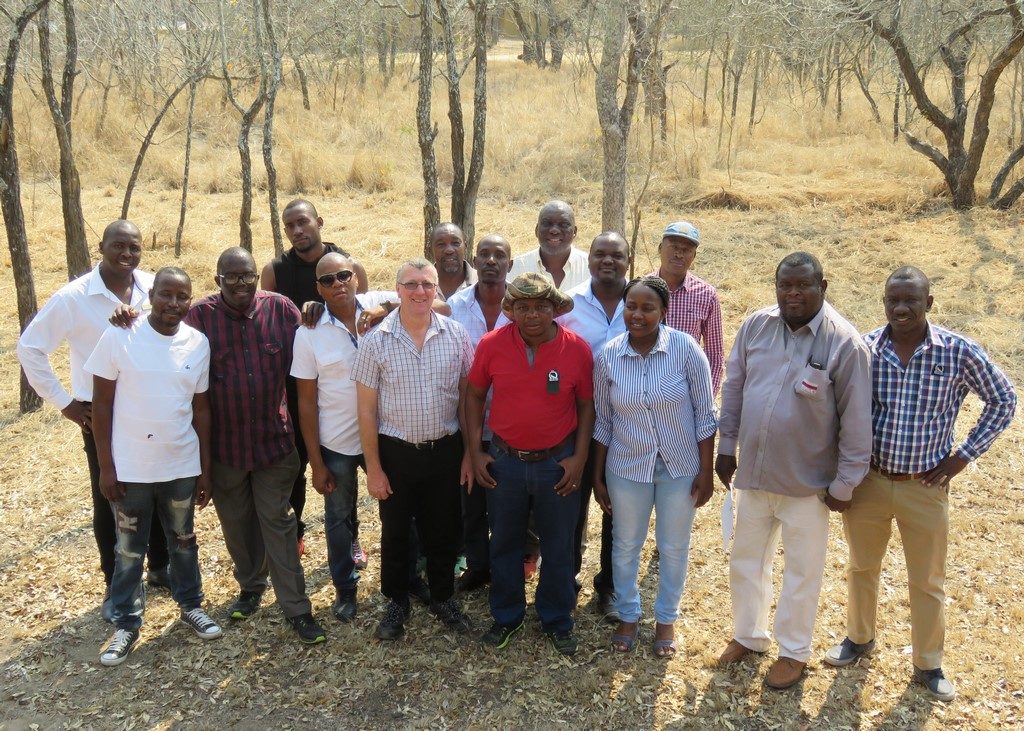 Contractors from the community who worked on the Phase II Infrastructure.

“The College has since its inception, empowered people from African countries to manage and conserve some of the world’s most biologically diverse areas. A huge thank-you to everyone involved in this project. It’s taken us to the next level,” concluded  Sowry.

The Southern African Wildlife College is based 10 km west of the Kruger National Park in South Africa. It is a non-profit organisation delivering conservation education as well as training and skills development programmes to help conserve the region’s rich biological diversity and ensure that its threatened species are conserved and protected. Since its inception, Peace Parks Foundation has supported the training at the College and formally recognises the College as its preferred training provider for conservation related training across the region. As an accredited Private Provider of Higher Education and Training, the training offered by the SAWC covers the full spectrum of skills needed. In addition, the College, through its Applied Learning Department , supports the development of environmental best practice using the College’s learning-by-doing approach to training. In doing so, the College provides tomorrow’s conservation leaders, field rangers and the community with the skills needed to become partners in saving the continent’s natural heritage. For more information, visit https://wildlifecollege.org.za

KfW is one of the world’s leading promotional banks with more than 6,000 employees and 80 offices worldwide. On behalf of its shareholders, the Federal Republic and the federal states of Germany, it applies its decades of experience to improving economic, social and ecological living conditions at home and abroad. KfW Development Bank is responsible for part of KfW’s international business, in which its two subsidiaries KfW IPEX-Bank and DEG are also involved. While KfW IPEX-Bank is active in international project and export finance, DEG provides financing and consulting to private companies investing in developing and emerging countries. KfW Entwicklungsbank, as part of KfW Banking Group, finances on behalf of the German government, development projects in partner countries. In 2017, 8.2 billion Euros were committed to 420 new projects and programmes. For more information, visit https://www.kfw.de and https://www.kfw-entwicklungsbank.de/International-financing/KfW-Entwicklungsbank.

Latest forecasts from the South African Weather Service (SAWS) indicate that over the next few months, sea surface temperatures over…