The man-eaters of Tsavo

If you saw the movie “The Ghost And The Darkness” you’ll know something about the Tsavo man-eating lions. This is a story that has long fascinated me so I jumped at the opportunity while on a recent trip the USA to visit the Chicago Field Museum where these most famous lions now reside.

For those unfamiliar with the story, the Tsavo man-eaters were a pair of mane-less lions which over a nine-month period up until December, 1898 terrorised the management personnel, artisans and construction workers of the British Ugandan Railway to such an extent that all construction on this vitally important project was halted for three months. During this time sheer terror forced hundreds of workers to down their tool and flee for their lives – but not before at least 135 people were killed and consumed by the two man-eaters. Such was the terror caused by these lions that they were even discussed in the British Parliament by the Prime Minister of the day, the Marquis of Salisbury! 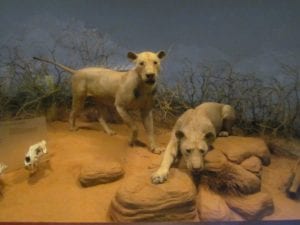 In 1924, Col. Patterson delivered a public lecture in the Field Museum. At that time he remarked to President of the Field Museum Stanley Field, that he still possessed the skins of the famous killers of men. As a result,

Lieutenant-Colonel John Henry Patterson was the engineer assigned to construct a railway bridge over the Tsavo River and he took it upon himself to deal with the man-eaters. How he did so makes for fascinating reading.

“When I landed at Mombasa, I fully expected to encounter many trials and hardships while engaged in building the railway through an inhospitable and savage territory. I anticipated engineering difficulties, perils from sunstroke and fevers, a possible scarcity of food and water, but never for a moment did I realize that the African wilderness held in its mysterious recesses two prowling demons who looked upon myself and my workmen as a sort of manna sent down from Heaven for their special delectation. All other difficulties were as nothing compared to the terrible toll of human sacrifice exacted nightly by these savage monsters who made Tsavo their headquarters and gave to that district an evil repute which lasts to this day.” Wrote Patterson in his popular book, The Man-Eating Lions of Tsavo.

Patterson also wrote: “I had been only a few days at Tsavo when one or two workmen mysteriously disappeared and I was told that they had been carried off from their tents and devoured by lions. At the time I did not credit this story and thought it much more likely that the unfortunate men were the victims of foul play. They happened to be very good workmen and had saved a fair number of rupees, so I thought it quite likely that some scoundrels from the gangs had murdered them for the sake of their money.

This suspicion, however, was very soon dispelled. I was aroused at dawn one morning by a man who came rushing to my tent to tell me that one of my jemadars—a fine, powerful Sikh named Ungan Singh —had been seized during the night and carried off by a huge lion. I immediately caught up my rifle and ran to the spot to find out if the man’s story was correct, but the moment I reached the workers’ camp I found ample evidence that the gruesome tale was all too true.

The lion’s “pug” marks were plainly visible in the sand, while the furrows made by the heels of the unfortunate victim showed the direction in which he had been dragged away. Moreover one of the workmen had actually witnessed the whole occurrence which he quaintly and graphically described. “Sahib,” he said, “I was awake and lying next to the jemadar, who was asleep, when a big lion put his head in at the open door. My heart turned to water when I saw him so near me, and I could not move. He first looked at me and then at Ungan Singh, and through the kindness of God he took the jemadar by the throat instead of your slave.

The unfortunate one cried out ‘Choro!’ (Let go!), and threw his arm up around the lion’s neck, but the great beast dragged him from his bed and carried him off while I lay paralyzed with fear, listening to the terrible struggle which went on outside the tent door. The jemadar fought hard, but what chance had he? Was he not fighting with a lion?” After hearing this vivid account of the tragedy, I at once set out to track the brute and in a short time came up to the spot where he had devoured the unfortunate jemadar. Here a dreadful spectacle presented itself. The ground all about was covered with blood, morsels of flesh, and the larger bones, but the head was left intact, save for a couple of holes made by the lion’s tusks [sic]. It was the most gruesome sight I had ever seen.

It was evident from the marks all around that two lions had been there and had probably fought for possession of the body. I collected the remains as well as possible and buried them under a heap of stones – the horrified, staring eyes of the severed head seeming to watch me all the time, for I did not bury it, but took it back to camp for identification before the medical officer. Before returning I traced the lions for a considerable distance further along the river, but finally lost all trace of them on some hard rocky ground. This was my first experience of the man-eaters and I vowed then and there that I would spare no pains to rid the neighbourhood of the brutes.”

The end of the man-eaters 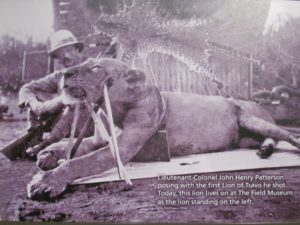 By using himself as bait Patterson was finally able to shoot the first of the man-eaters in December, 1898. He bravely used the same method for account for the second man-eater some weeks later.

By using himself as bait Patterson was finally able to shoot the first of the man-eaters in December, 1898. He bravely used the same method for account for the second man-eater some weeks later.

In 1924, Col. Patterson delivered a public lecture in the Field Museum. At that time he remarked to President of the Field Museum Stanley Field, that he still possessed the skins of the famous killers of men. As a result, they were purchased by Mr. Field and presented to the Museum. With considerable difficulty, owing to the age of the skins, they were mounted and are now permanently preserved and on display. The lions look smaller than they would have been in real life. This is because they were skinned and trimmed for flat-skin rug mounts – and were used as such by Patterson for more than 20 years.

Patterson also wrote “On examining his head, I found that a .303 bullet had smashed out one of his tusks [sic], for the track of the bullet was left in the tooth stump. I must have given him a bad toothache the night he attacked Brock and myself in the freight car.” It is now evident that Patterson was mistaken. The Tsavo lion’s broken canine is worn and rounded. Had it been shattered by a bullet the tooth’s edges would still have been sharp. Breaking the tips off their canines is a common occurrence for lions which feed on the pachyderms.

A twist in the tale

As a veterinarian I have long believed there to be another twist to the Tsavo man-eating lion’s tale (if you’ll pardon the play on words) which nobody ever mentions or connects the dots. The Rinderpest pandemic was, in my opinion, the primary reason why these two lions became man-eaters. Please allow me to explain. Also known as the “Great Cattle Plague” this acute viral disease of all cloven-hooved animals was somehow introduced from Europe into Africa, most likely via cattle taken on a military expedition by the Italians. This was a new disease to Africa to which all cloven-hooved animals were suseptable. Whatever the cause, the rinderpest pandemic started in what is today Eritrea in 1890 and over the next 8 years it was to spread the length and breadth of the African continent, killing in the process an estimated 80 to 90 % of ALL the continent’s cloven-hooved animals! Only the continents’ elephants, hippos, zebras, primates and carnivores were spared, all the rest of Africa’s ruminants, from giraffe’s to duikers, and the buffalo, including its cattle died in their millions.

Here in the greater Kruger National Park we are currently experiencing our fourth consecutive year of drought and what is very evident is how well the lions in particular are doing because it. In the veterinary profession we have a saying – and it is simply this: “90 % of the success of breeding can be attributed to feeding.” In drought conditions there is lots of food for the lions so they do well, as I’m sure they surly did during the rinderpest pandemic.

With a relatively short gestation period and the ability to have large litters, lions respond quickly to ‘times of plenty’ – and if ever there was such a time, it was surly during the rinderpest period when cloven hooved African animals died over an eight year period, in untold numbers. Over this time I suspect the lion population must surly have boomed. Here must however have come a time when the disease had run its course, surviving game animals must have been very scarce and there must have been lots of lions. Forced by hunger, lions naturally looked for another protein source – man.

It is the opinion of lion specialist, Dr. Paula White that based on the fusion of the inter-frontal sutures on the two Tsavo lions sculls, they were between 5 and 6 years old. Detailed records of the rinderpest pandemic are sketchy but we know it started on 1890 so we can assumed this disease must have passed through Kenya in the early to mid 1890’s. (Thanks to the writings of F.C. Selous we know it crossed the Zambezi in 1896) The Tsavo lions were shot in 1898 when they were about 5 years old which puts their birth date 1893 – and I assume this was round about the time of the rinderpest pandemic in Kenya.

It is not inconceivable to assume that they might even have been born because of it. I have no doubt these lions experienced feast condition for a number of years, and then famine when the pandemic had run its course. 1898 was most definitely the post-rinderpest period in Kenya, so I assume game, in the form of cloven-hooved prey animals were very scarce. A large, relatively unprotected labour force would have been the only substitute – of which they took advantage.

What it takes to be a Conservation Manager in the private sector.