Everyone knows that Africa dances to the beat of her own drum. There is one element, however, that does not seem to take its time, and that is the change in the seasons.

One day can be sweltering with temperatures well into the 30s or even 40s, and the very next day can see the arrival of the first cold front, which usually results in a couple of days of cool and cloudy weather with spells of misty rain. When the fog clears, the temperatures remain moderate to warm, and just like that, Winter has arrived. A cool breeze rolls in at around sunset chilling the air after a pleasantly warm day, perfect for sitting outside enjoying the sights and sounds. The mornings are often misty and cold, but the sun quickly melts the dense air and leaves us with hours of sunshine, comfortably bright and warm. For many people, the transitional Autumn season we are experiencing right now, is the best time of year. Apart from the milder climate, the bush in April/May is still lush and green with just a hint of yellow at the top of the grass as the seeds start to dry. But for us, the best of all about the coming Winter… the lack of mosquitoes!

The good rain we received late this season reminded me of the resilience and recuperative powers of the African bush. The grass was the first to respond, pushing up and seeding quickly. Then, the warm days and follow-up rains brought green leaves to life, and soon the bush was restored from its roots and will be maintained until the next rains. The Marula trees also responded well this year with a fair harvest of fruit. The good marula harvest coupled with the abundance of good grazing has attracted a bountiful number of elephant into our area. A large breeding herd of over 30 elephants and a good number of bulls have been seen on site enjoying the fruits of the season. And it is not uncommon to see as many as six elephant bulls grazing on the open area in front of the College reception in the afternoons. The little pan at the workshop gate also seems to be very popular with the elephant and it is more common than not to see at least one elephant bull drinking there at any given time during the day.

Stompie seen in 2012 when Gawie nicknamed him

Three of these bulls deserve special mention. The first is a youngster that pays us a visit almost every year at this time, but he has been absent from his post at the workshop for the past two years. Perhaps his absence  was due to the lack of good grazing and sweet marulas, but this year he is back and seems to be extending his visit with us. We know its him because he is easily identified by his stunted trunk. We assume he got it caught in a snare or just an old piece of wire carelessly left in the bush, or perhaps he injured it while trying to break through a fence. Whichever way it happened, it doesn’t seem to be bothering him one bit. I saw him for the first time back in 2012 when he was around 15 to 20 years old. He is still in very good condition and is very capable of drinking and feeding despite his abnormality.

The other bulls that stand out are two old males, just past their prime. One of them has beautiful, long , symmetrical tusks, and in a few years they will be very impressive indeed. The other bull is a bit older with one short, thick, and heavy tusk. His second tusk has broken off well inside the lip. His wrinkled old face speaks volumes of a lifetime spent in harsh African conditions. He has a peaceful confidence about him that you only get to see with the real old timers. I never get tired of watching him. 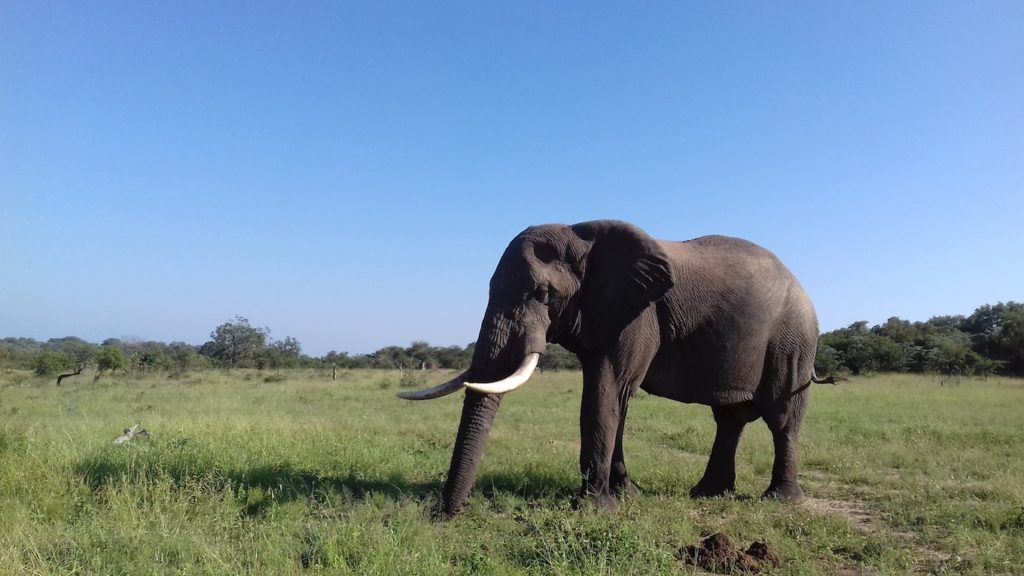 The big tusker seen in front of College reception 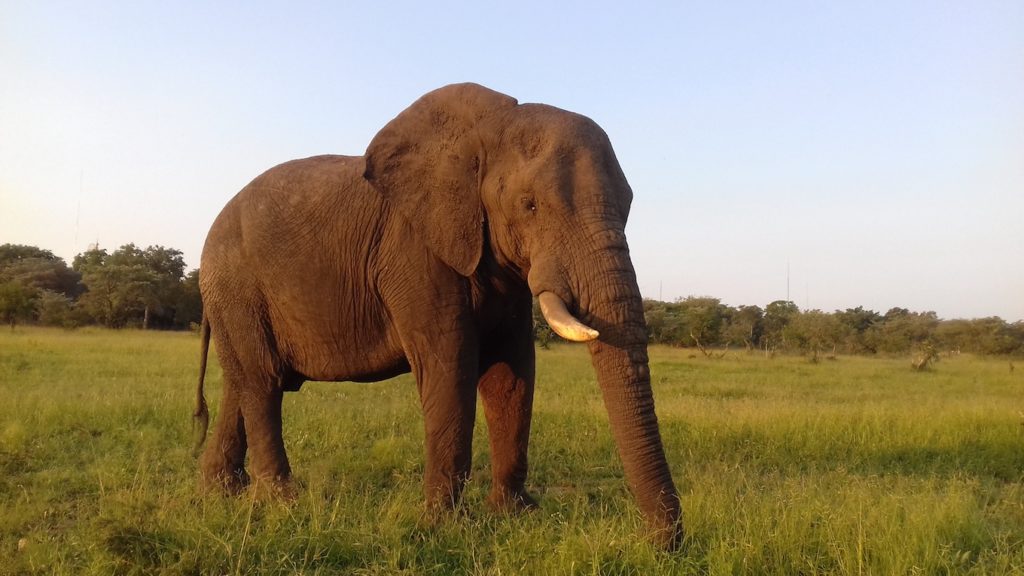 The impala rut seemed to be a little delayed this year due to the drought, but it is now in full swing just in time for the mating season. The rams’ territorial bellows can be heard right through the night; a sound that can be surprisingly predatory to those who are not familiar with our humble impala. The zebra and wildebeest numbers are also looking good once more, and the same goes for giraffe. Predators are scarce by comparison, with only a few lucky sightings such as the cheetah on an Impala kill being spotted in the area.

A pack of wild dog has also been seen around the College training area on a number of occasions, and at least two sightings of a young male leopard were recorded while out with students. There’s one thing we can rely on, however, and that is the eerie, whooping call of the hyena that fills the darkness every night.

Thanks to the relationships fostered by Dr. Kevin Robertson who heads up the College’s Sustainable Use and Field Guiding Unit,…