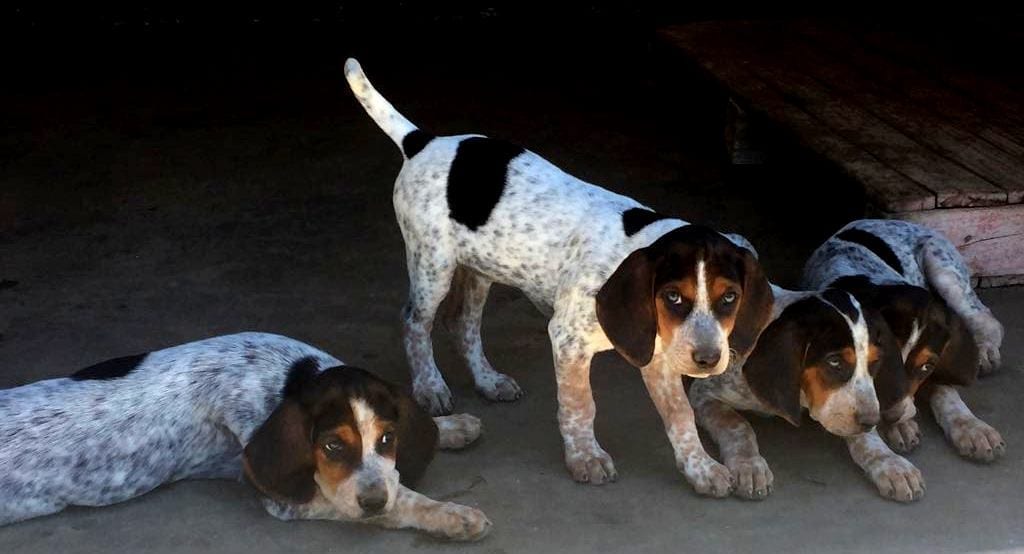 It’s hard to tell who is more proud of the 4 new arrivals (3 male, 1 female), mom V or Dog Master Johan van Straaten, who has high hopes for the pups. “The pups have already started training, getting socialised and used to people to build their confidence, and we’re about to start on tracking training. As their characters and strengths appear, we’ll evaluate which ones will be pack dogs, and which will be individual line trackers,” he explains. 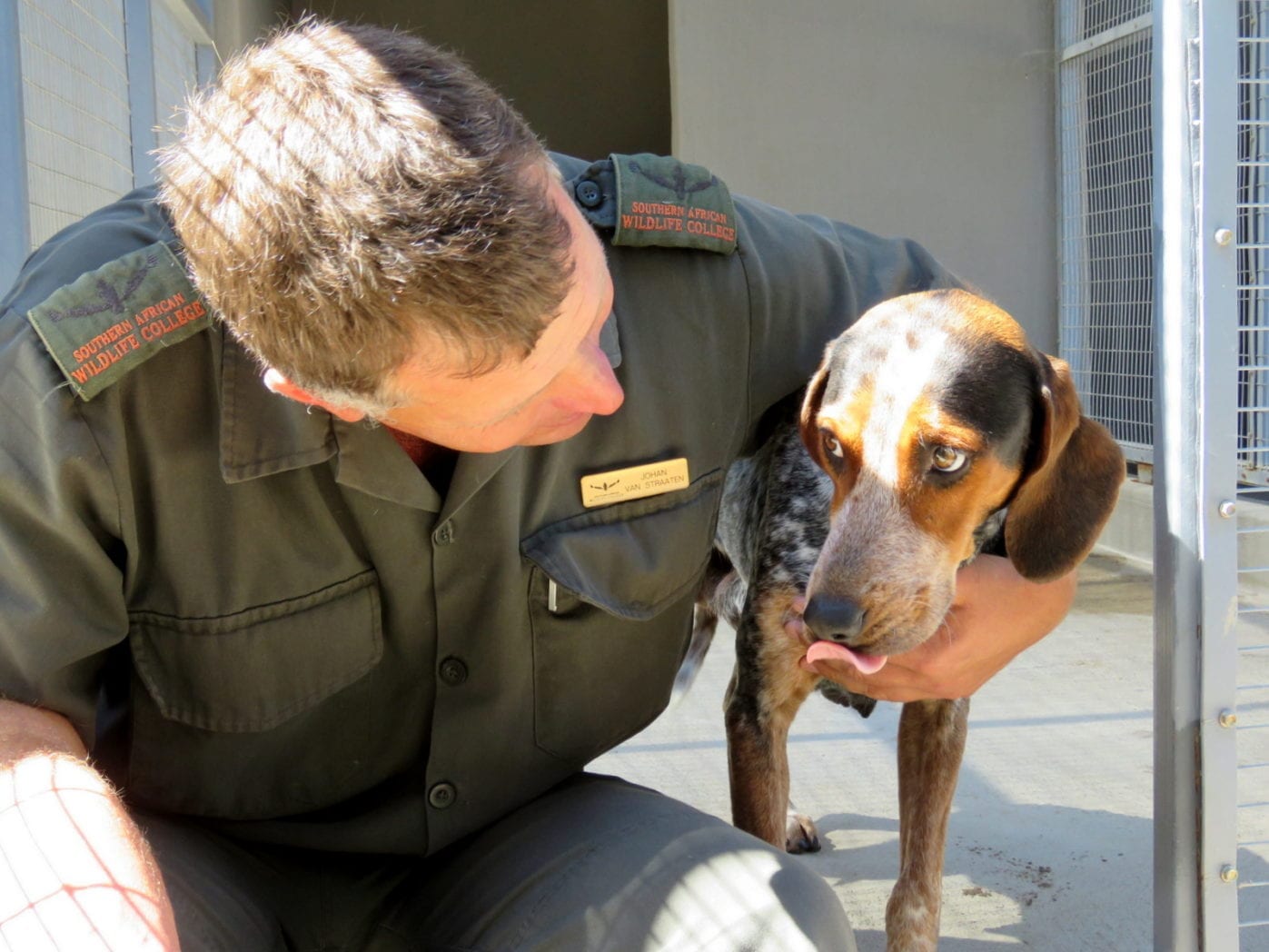 Their sire is another tenacious cross-breed hound called Rhino and they’re only the second litter born at the College, arriving late in 2017. They are housed in modern, north facing kennels with the rest of the College’s dogs and will add valuable capacity to the unit when they’re older.

With the pups, there are 21 dogs currently housed at the College. Its K9 Unit was established in 2015, supported by the WWF Nedbank Green Trust. In October 2017, a substantial three-year grant was awarded to the SAWC by the International Fund for Animal Welfare (IFAW). This grant will make sure that the highest possible standards are met when it comes to the welfare of dogs working in the service of wildlife conservation, including these puppies. It enables the unit to support, train and build the capacity of the K9 unit, which will in turn support the work of field rangers and wildlife law enforcement officers across Africa. 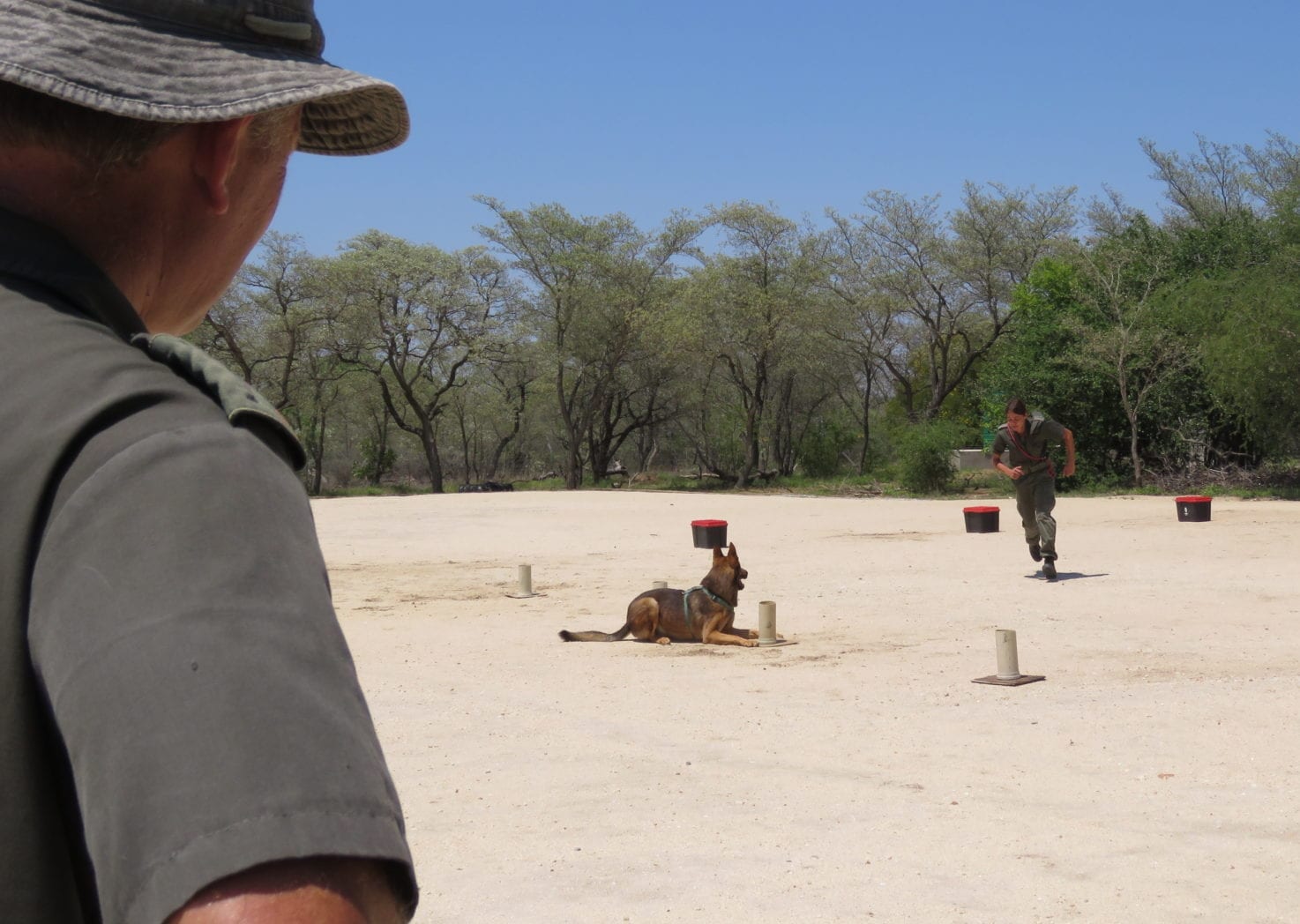 The College trains and works with cross-breeds of English foxhounds, blueticks, and beagles as well as Belgian Malinois’, a slightly smaller, more agile German shepherd. The breeds have highly specialised and complementary skills. “Dogs like V are good at tracking and pack work, while the Belgian malinois’ are good all-rounders. They can apprehend a poacher, protect the handler, and search for evidence and illegal substances, sniffing out rhino horn, pangolin, drugs and other contraband,” says Johan. These combined skills are deployed in various ways in the field. “Their reward is the work itself,” notes the passionate dog master, who has a unique relationship with each of the canines in the kennels. 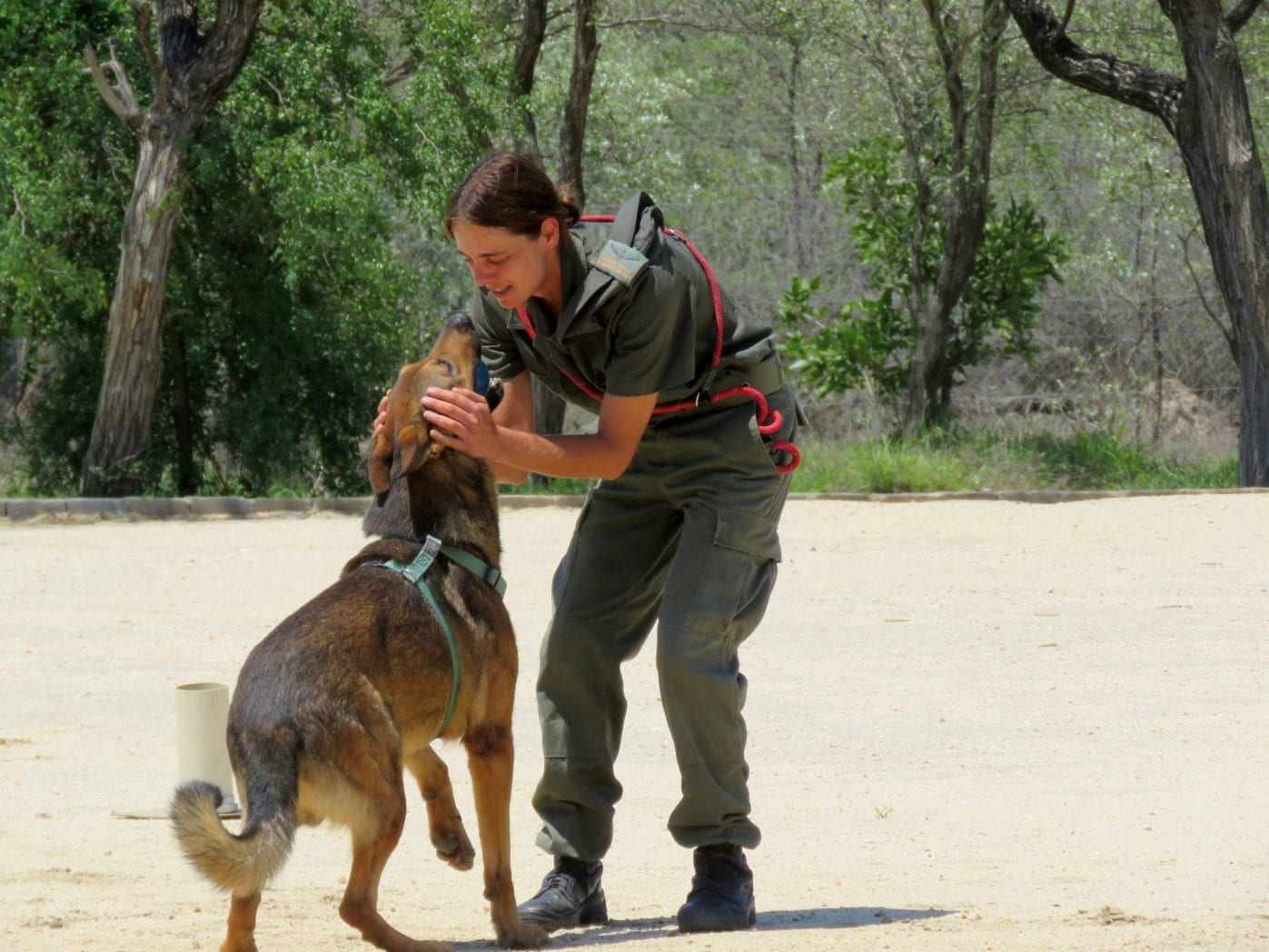 Training handlers and exposing field rangers to this critical anti-poaching capacity is also important given how valuable dogs are in the field. They are flown in to track the spoor of poachers, while pack dogs run off leash and can be followed by a helicopter, to catch poachers at high speed. This capability streamlines follow-up operations with poacher incursions as dogs are not restricted to their handlers and can make up valuable time in tracking down poachers.

“There is increasing demand for well-trained dogs and handlers to help combat wildlife crime, notes College CEO Theresa Sowry. “The deployment of effectively trained handlers and dogs is adding to the success rate of anti poaching teams. We’re constantly surprised by the dogs’ skills and tenacity as well as their ability to track human spoor for kilometers,” she notes.

“Thanks to the grant from IFAW, which follows on from the grant awarded to the SAWC by the WWF Nedbank Green Trust, which enabled the College to start up the project, we now have a fully fledged K9 training unit. Ultimately we see this capability being used across the SADC region,” she notes.

About SAWC
The Southern African Wildlife College, which is based 10 km west of the Kruger National Park in South Africa. It is a non-profit organization delivering conservation education as well as training and skills development programmes to help ensure the region’s rich biological diversity and ensure that its threatened species are conserved and protected. In doing so, the College provide tomorrow’s conservation leaders, field rangers and the community with the skills needed to become partners in saving the continent’s natural heritage. For more information, visit www.wildlifecollege.org.za

About IFAW
Founded in 1969, IFAW rescues and protects animals around the world. With projects in more than 40 countries, IFAW rescues individual animals, works to prevent cruelty to animals, and advocates for the protection of wildlife and habitats. For more information, visit www.ifaw.org Follow us on Facebook and Twitter. Photos are available at www.ifawimages.com