A dense layer of smoke and dust filters the late afternoon sun giving off the pastel yellows and oranges the Lowveld is famous for at this time of year. A blue wildebeest bull stands in a sea of yellow grass shimmering gold in the last rays of light. Scratching around his midden with his front hooves, he kicks up dry brown dust that soon covers him in a beautiful orange halo as the sun sets behind him. You can taste the dust in the back of your throat and dry sweat cakes your shirt. Soon now an ice cold drink will wash the last of the day’s heat away and, as the sun dips behind the horizon, you will reach for something warmer. A black backed jackal starts his evening serenade closely followed by his mate not far away.   Yip you guessed it, the dry season is in full swing. The days are getting longer and warmer but the evenings and early mornings are still chilly.

All the shallow water holes have long dried up and only the deepest ones still carry a little bit of water that by now resembles chocolate milkshake or pea soup, depending on when last an elephant has visited. Pea soup means it has been a while as the mud has had time to settle back down to the bottom leaving the algae-rich water to settle on the top. Elephants love a good mud bath, especially on a hot dry day. After slaking their thirst, they will often walk into the water and then, using the trunk and feet, pummel the water mixing water with mud until it is just the right consistency. If it is too watery they will often use their tusks to break off some adjacent dry mud and put it in the mix. Using the trunk, they will now liberally cover their entire body with the stinking sticky mud. If the wallow is big enough some will even go down and attempt to roll around in the pool; the elephant not giving second thought to the fact that they have just destroyed the waterhole for every other animal in the near vicinity for some time. That is until the mud has settle once more.

For some this muddy mix is a death sentence. Often the mud will settle in the centre of the pool first and desperate animals will venture into the sticky mud attempting to get to the precious water. Unlike the elephant, most other animals lack specially adapted feet to prevent them from getting stuck. Our own hippo quarry has claimed at least one buffalo so far this year.

This quarter has brought with it some once in a lifetime sightings. The two most noteworthy both involving elephants. The first one occurred one afternoon while out driving with Dr. Kevin Roberston who was visiting the College from the USA. We came across a small breeding herd of elephants and quickly noticed two very small elephant calves staying very close to one another. Both seemed to be attended to by one elephant cow. We searched the herd carefully and could not find another lactating cow. The two calves’ similarity in size and the close bond to one another made us come to the conclusion that they must be twins. It was confirmed by elephant specialist, Dr. Yolanda Pretorius who heads up our Natural Resource Management Qualifications department, when she bumped into the herd and came to the same conclusion. In my 20 years in the Greater Kruger National Park observing elephants almost daily, I can truly say that I have never seen elephant twins. A wonderful sight indeed!

The second happened a few weeks ago while out on a tracking assessment with two of our students. We again came upon what at first appeared to be a small family of elephant close to hippo quarry. Two adults, a sub adult and a six-month old calf. After some observation I noticed that all of the big elephants were bulls. What I at first thought were adult cows were in fact two teenage bulls in their early twenties and the sub adult was a teenage bull. The calf also appeared to be a little bull. We observed them for a while, watching the little one struggling to get some solid food into his mouth, but he still needs to practice a lot before he will be able to feed himself properly with his trunk. We followed them to hippo quarry where they all had a drink. The small calf has not yet learnt to suck water into his trunk but could at least scoop some water into his mouth forming a cup with the tip of his trunk. Where his mother was and what happened is still a mystery. There have been a number of cow herds in the training area over the period and we can only hope that the little one has been reunited with his mother.

Providing further excitement one Sunday morning was a lion kill. A couple of students on their early morning run around the College perimeter fence got the fright of their lives when they happened upon a pride of lions that had just caught a wildebeest right next to the College fence. By the time I got to hear about it the action was long over. I did however take the family out to investigate. We could not find the lions but we did see a couple of hyenas enjoying the leftovers.

Leaving the hyenas to their breakfast we took a drive to hippo quarry to have a little breakfast of our own. There we found a saddle backed stork looking for meal. After observing it for about an hour and a half he finally got lucky and caught a small frog. 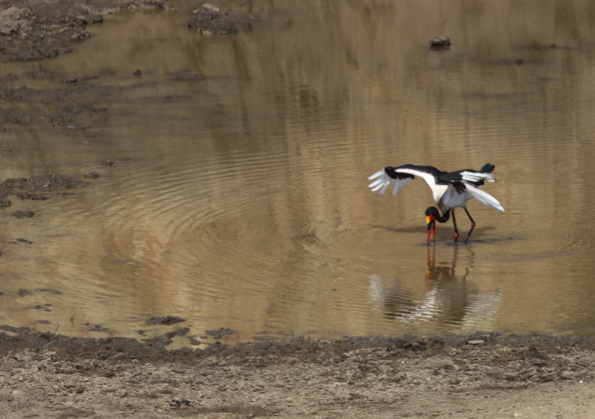 Later that afternoon we took another short drive and we finally managed to see the lions lying up near the air strip. After some time one lioness got up and started walking directly towards the vehicle. Slowly but surely we were then treated to the whole pride walking right past the vehicle. By this time the light was no longer on our side but as there were small cubs present we did not want to put on a spotlight. We were thus forced to take pictures at maximum ISO. A bit grainy but at least a good record of a fantastic sighting. What a privilege to be able to share this with my family. Until next time…