(Stockholm, Sweden – January 27, 2021) – CAKE, the Swedish leader in premium electric off-road motorbikes, announced today the launch of Kalk AP (Anti-Poaching), a special edition Kalk that has been redefined and optimized for rangers working to protect wildlife in the harsh conditions of the African bush. The Kalk AP is a critical component of CAKE’s recently launched initiative, the Electric Bush Bike Anti-Poaching Act, which aims to help organizations in Africa combat the devastating effects of poaching on the continent’s most endangered species.

The Kalk AP  has been developed in tandem with staff at the Southern African Wildlife College to ensure the motorbikes can successfully serve rangers in their work. Later this year, the CAKE Kalk AP will enter field operations when the SAWC begins formally testing and utilizing the motorcycles with the associated Goal Zero solar kits as part of its educational curriculum and training. Using motorbikes is an essential part of anti-poaching in Africa. Today these bikes run on inaccessible gasoline and their noise warns poachers miles away: Unsustainable and inefficient. By utilizing CAKEs electric off-road motorcycles, the goal is to increase efficiency in catching poachers by quietly being able to approach them.

“Solar power, new technology, and a new category of vehicles that help save endangered species in Africa. This is a perfect example of purpose meeting sustainability,” commented founder and CEO of CAKE, Stefan Ytterborn. “We are extremely honoured to be able to work with our partners on this initiative and to contribute to developing the means to help curb poaching in the region.”

The Kalk AP is available for purchase as part of a ‘buy-one-give-one’ charity campaign that funds the initiative. CAKE and Goal Zero will also donate their profit margin from these sales directly to the SAWC. When a customer purchases a Kalk AP, an identical twin will be made. The bikes will then be delivered to conservation areas across Africa where they are most needed to help counter poaching.

Additionally, purchasing a Kalk AP also covers the donation of a solar panel and power station kit from Goal Zero that enables the twin bike to operate in the African bush independent from the electric power grid on an ongoing, self-sufficient mission to protect wildlife. All twin bikes are also connected via the CAKE connectivity platform, meaning that a customer can stay connected to the sibling bike that is in the bush. The customer will receive continuous updates on where it is, what is happening, and what good it has achieved. CAKE will also receive these notifications and will share ongoing achievements in various channels.

Customers looking to support the Electric Bush Bike Anti-Poaching Act by purchasing a Kalk AP can do so by reserving a model for $1000 at www.ridecake.com. The total cost of a Kalk AP, the donation of a Kalk AP, and the solar panel / solar kit is $25,000 with delivery starting September 2021.

The Kalk AP weighs just 176lbs / 80kgs and uses a 50A / 2.6kWh battery to deliver a peak motor output of 11kW and 3+ hours of ride time. This powerful system results in 42nM of torque at the hub, 280nM of torque on the wheel, and propels the bike to top speeds over 56mph / 90kph. The bike features CAKE’s three ride modes and three braking modes while also using the same gearing as the Kalk OR / Kalk INK with an 80T rear sprocket and 12T front sprocket.

Furthermore, the software has been adjusted to enable the bike to deal with higher temperatures, and specific heat driving characteristics have also been modified—for example, achieving high speeds may not be as necessary as torque at low speeds. Like all CAKE models, the battery is removable and can be charged while on the bike or separately.

The robust and specifically developed front and rear suspension cater to low maintenance without sacrificing performance. A sealed motor means the bike is fully submersible and resistant to the harsh, dusty conditions rangers encounter.

The bike features a high front fender to deal with mud and clear obstacles. It utilizes CAKE’s 18 x 1.85” rims and 3.5” Continental TKC80 off-road tires on both wheels. This setup is a different wheel and tire configuration than other Kalk models, enabling the Kalk AP to disperse weight and decrease ground pressure—an absolute must in muddy conditions.

Kalk AP utilizes a 2100 lumen removable clamp on headlight for powerful illumination, and all plastic components on the bike are made from recycled, fiber-reinforced Trifilon, a biodegradable polymer.

CAKE Connect is a prominent feature of the bike, providing navigation, communication, and location identification. This feature will also help the teams better understand what adjustments they will need to make to optimize performance and efficiency while in the field. 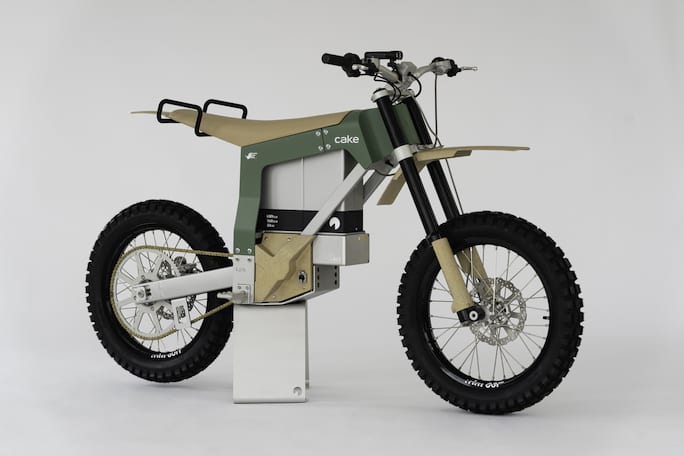 Background on the Initiative and Partnership with SAWC

Poaching has devastating consequences for all wildlife all over Africa. In some instances, it is the primary reason why many species face the risk of extinction. Contrary to general perception, one of the strongest motivations for poaching is poverty and the need for food among local inhabitants. Areas with widespread poaching are often large, remote, and lacking roads, making patrolling by car virtually impossible.

Recently, anti-poaching teams have started using dirt bikes for patrolling. However, these bush bikes run on gasoline, and, depending on the location, the fuel used to power these bikes must be brought in by truck or via helicopter. Although the motorcycle approach has proven highly successful, the roaring combustion engines unfortunately alert poachers miles away, decreasing the chances of catching them. By utilizing CAKEs electric off-road motorcycles, the goal is to increase efficiency in catching poachers without forewarning them of an approach.

The Southern African Wildlife College is situated just 10 km west of the Kruger National Park in South Africa. It is the perfect campus setting to provide working examples for students to learn conservation theory and best practices in and out of the classroom. As part of its ‘learning by doing’ curriculum, the SAWC establishes a cycle of innovation and development. The curriculum and various training programs are continuously evolving, allowing the SAWC to address current conservation training needs while shaping the future conservation landscape.

As a center of specialization in conservation education, training, and skills development, the SAWC’s approach is rooted in science, partnerships, and applied learning. The SAWC’s Applied Learning Unit supports the SAWC’s efforts by facilitating monitoring, evaluation, research, and application in all departments, enabling the SAWC to maintain focus on real issues faced by students and practitioners in their work. For these reasons, the SAWC keeps up to date with relevant new techniques and has, for example, recently pioneered and seen great success with the use of free-running pack hounds in the battle against rhinoceros poaching in the Greater Kruger National Park.

“This partnership to test new technologies for innovative conservation solutions is extremely exciting. We are very proud to be partnering with CAKE and Goal Zero to test these electric off-road bikes given the impact that this could have on countering poaching across Africa,” said the SAWC’s CEO, Theresa Sowry.

CAKE is a Swedish company with a clear mission to inspire towards a zero-emission society by combining excitement and responsibility in its development of light, quiet, and clean high performance electric off-road motorcycles. Its first model, the Kalk, debuted at Denver’s OR and Munich’s ISPO shows in January 2018 and has received numerous accolades, including the 2019 and 2020 Red Dot Design Award, IF Design Award, Automotive Brand Contest Award, and “Best in Show” designation by several outdoor industry publications. In 2019, CAKE launched the Kalk&, a street-legal motorcycle as well as Ösa+ and Ösa Lite, a utility platform with an integrated power station and off-road capabilities, which extended their award-winning streak. Kalk INK debuted in March 2020, with the street-legal Kalk INK SL entering the line in April 2020. CAKE expanded into the race scene in November 2020, launching the Kalk OR Race and Kalk INK Race.

It’s all about the outdoors. Explore with respect.

Learn more about CAKE at www.ridecake.com.