June 2019 marks a significant milestone for the Southern African Wildlife College’s K9 Unit: over 100 arrests since February 2018 when the packs went operational!

Working in close collaboration with partners and law enforcement officials in the Greater Kruger area, the unit’s involvement in the apprehension of over 100 poachers in the past sixteen months is unprecedented. This translates into more than six arrests per month!

According to the College’s counter-poaching data, when responding to incursions without any K9 asset, the apprehension rate is low, about 3-5%. Working with a K9 Unit, it increases to 54%! That is a more than 10 fold increase in successful apprehensions. This means that rangers are 10 times more successful in apprehending poachers when they work with dogs, than when they work without them.

In addition, over 40 weapons have been taken out of the system, making people and wildlife safer.

“There is no single person who has made this project a success; it’s been combination of determined teamwork, high levels of professionalism and innovation, generous donor support and an enduring belief in the dogs and their capabilities in the field,” said College CEO, Theresa Sowry, commending the rangers and their canine partners for their incredible efforts in arduous and often dangerous circumstances. 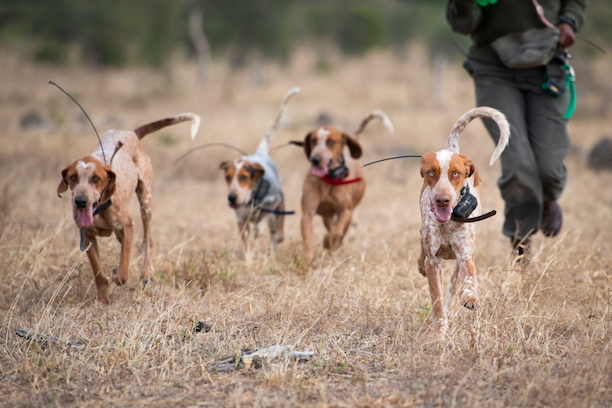 The College’s K9 Unit was established at the end of 2015 with the support of the WWF Nedbank Green Trust and has gone from strength to strength. The arrival of the two packs of free-running hounds from Texas in 2018 was a turning point as the College broke new ground by testing the free tracking and apprehension capabilities of dogs in Kruger National Park. The dogs were successful on their very first deployment, and the pack dogs have since become a vital component in numerous operations.

“When we reflect on this milestone, we cannot forget Terry Rubenstein who helped set up the unit and Joe Braman from Texas for their K9 training abilities which helped support the College team, headed by Johan van Straaten. This knowledge and experience on how to work with free tracking hounds has provided the trajectory to achieving these successes,” said Sowry.  She noted that the arrival of the two packs of dogs from Texas in the USA in July 2018, supported by the Ivan Carter Wildlife Conservation Alliance has been a game changer “as we continue to battle daily incursions, while working on long term solutions with communities”.

Initiated with the support of the Kingfisherspruit Ranger Station, with the sanction of the Kruger National Park, the College’s K9 Unit forms part of its four-pronged, learning-by-doing approach to help counter poaching. Along with the K9 Unit, this includes trained field rangers, aerial support and  community interventions to help protect targeted species such as rhino.

While on-leash tracker dogs are commonly used by counter-poaching teams, pack dogs that run off leash are relatively new to the scene,  but have certainly proved their worth! They can track at high speeds over even the most difficult terrain; recent exercises have seen them cover 30 kilometers in two hours. Their top speeds, measured regularly over short distances, are around 40 kilometers per hour! Using aerial support to follow the dogs allows the rangers to catch up valuable time in the field.

The College’s applied learning approach, which has helped test proof of concept with the free tracking dogs, will certainly now bolster the use of dogs as part of other successful counter poaching operations. As the demand for well-trained dogs and handlers grows, there is also potential for the College, as a SADC training institute, to play a major role in replicating the K9 Unit’s early successes in protected areas throughout Africa.

The Southern African Wildlife College is based 10 km west of the Kruger National Park in South Africa. Established in 1996, it is a non-profit organization delivering conservation education as well as training and skills development programmes to help conserve the region’s rich biological diversity and ensure that its threatened species are conserved and protected. In doing so, the College, which is an accredited higher education and training facility, provides tomorrow’s conservation leaders, field rangers and the community with the skills needed to become partners in saving the continent’s natural heritage. For more information, visit www.wildlifecollege.org.za

Aerial view of our K9 Unit at work. Follow our dog